When the Nokia 7280 was announced, it was like nothing anyone had seen before and was certainly the most exotic of the three devices Nokia announced in a “fashion collection” which comprised the Nokia 7260, Nokia 7270  and Nokia 7280. It was introduced at an event in Shanghai, and the collection of new products was described as being “inspired by the glamour and elegance of the lavish 1920s” which “blended old world art deco styling with an edgy, modern day twist.” Nokia went on to say that “core style influences such as flow and movement, colour, geometry, detailing and graphics were the inspiration and creative energy behind the collection.” The Nokia 7280 was singled out by the company as being a “sleek and sexy” device offering “a completely new mobile phone design, foregoing the traditional keypad for a discreet keyless dial.” The focus on design was reflected in its official description of a “fine lacquer-inspired high-gloss finish, complemented by leather and mirror accents” which Nokia claimed added “sophistication and style making this device as much a work of art as an advanced piece of technology.” Referring to the Nokia 7280 as “the fantasy phone for the fashion-conscious” Nokia suggested it would be “perfect to whip out at cocktails” as it was “geared to attract attention and become the talking point at any high glamour soiree.” Furthermore, it assured future owners that they could keep the handset safe thanks to its “chic strap and carrying pouch.” The phone quickly got the nickname the “lipstick phone” which was derived from the design. The exterior featured a black body with white stripes but when you slid the device open it exposed a red interior. This “active slide” mechanism also served to answer and end calls as well as revealing the VGA camera. The 7280, which cost €600 when it was launched, had a small 208 x 104 pixels 65,000 colour screen which doubled as a mirror when the display was off. The user interface on the phone was challenging as it featured a small rotating wheel controller which had similarities to the Click Wheel on the Apple iPod. In order to make a call, the user had to scroll backwards and forward through a line of numbers from 0 to 9 selecting each individual number as they went along. Names could also be selected from an address book. Sending a text message was an even more painful experience. Users had to scroll the rotating wheel backward and forward through the alphabet to type the word they wanted. Nokia tried to make things easier with a predictive text capability that would display the six most likely words a user was trying to type which, when it worked, made life a lot easier. Nokia also offered a rudimentary voice-activated interface to make calls and access certain functions, but it was seldom used. In parallel with the launch of the 7280, Nokia also unveiled the Wireless Image Headset (pictured). This had a matching design and connected to the 7280 via a Bluetooth connection. It hung around a user’s neck and incorporated a 128 x 128 pixel colour screen that allowed the user to see who was calling, make a call, browse their phonebook as well as display photos. 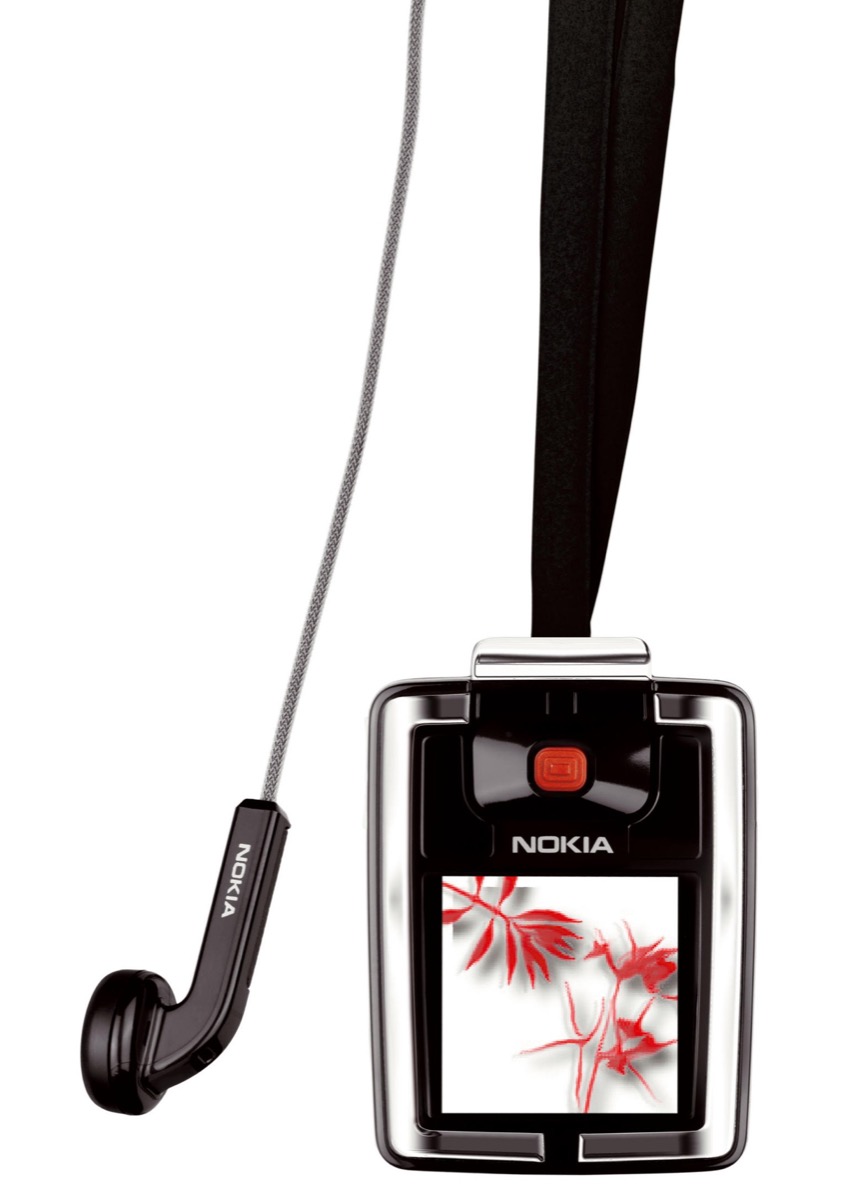 Nokia continued to pursue this design and later launched a similar looking follow-up device called the Nokia 7380  which was part of its “L’Amour” fashion collection. The 7380 did not have the slider mechanism that opened to reveal the camera as Nokia was threatened with a patent infringement on this design element on the Nokia 7280 by a well-known camera maker. The lead designer for the Nokia 7280 was Tej Chauhan, supported by Grace Boicel and Tanja Fisher. It was made using injection-moulded polycarbonate ABS, a tough and rigid material which was a blend of terpolymer of acrylonitrile, butadiene and styrene. there were also metal and suede details. The video below, entitled: Nokia 7280 - Mad or Magical - was produced by Richard Edwards.